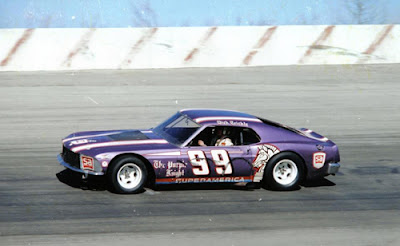 
St. Paul, Minn. (September 3, 1973) – Tireless Dick Trickle of Wisconsin Rapids, Wis., became the second repeat winner of the Minnesota State Fair’s Minnesota 500 late-model sportsman race on Labor Day.
The only other repeat winner in the eight-year history of the event was Ernie Derr of Keokuk, Iowa, who won the event in 1966, ’68 and ’69.
The 31-year-old Trickle, driving his familiar purple and white 1970 Mustang, won by four laps over Mike Miller of New Prague, Minn., who was also driving a 1970 Mustang.
Trickle earned $4,000 of the $21,000 purse which was up for grabs in the first race sanctioned at the Fair by the National Association for Stock Car Racing (NASCAR). The attendance for the event was 10,629.
Starting in the second row behind Bob Jusola of Burnsville, Minn., and Jim Sauter of Necedah, Minn., Trickle took over the lead for keeps on lap 188. Twenty-four cars finished the race, a surprisingly large number. There was a total of 68 yellow flag laps, some of which were brought on by rain showers.
Trickle went to the pits a total of three times – the last time when the yellow was out on lap 401.
The winningest driver in the nation in 1972 with 67 feature wins, Trickle boosted his 1973 feature win total to 44.
Jusola gave Trickle a chase most of the day in his 1966 Chevelle before encountering mechanical problems and finishing eighth.