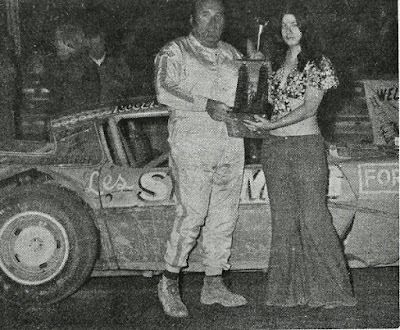 
Seymour, Wis. (September 14, 1975) – Roger Regeth’s game plan worked to perfection on Sunday night at Paul’s Super Speedway as the Kimberly, Wis., lead foot captured the top prize of $1,500 for winning the “Champions of Champions” 100-lap late model feature.
“We built some plow into the car so it would run better later in the race,” Mike Randerson, master chassis builder and Regeth’s head mechanic, noted after the century grind. “I knew Reggie wouldn’t run that fast in the first half but in the last 50 laps the car started to work.”
Regeth, in gaining his 26th feature win of the season, was pressured by Dick Trickle of Wisconsin Rapids, Wis., for 42 circuits until Trickle blew a tire on his 1970 Mustang with four go-rounds remaining.
Track champion J.J. Smith led the opening 53 laps of the race and was able to open up a four-car length margin over Trickle despite a red flag period. That happened on lap 46 when Bob Kleinschmidt lost a wheel on his 1973 Camaro.
All cars pitted at that point for refueling and Smith would blast off once again to take the lead with the waving of the green. Trickle and Regeth, who started on Smith’s bumper due to the restart, immediately set out after the 1975 Camaro.
J.J.’s night would end six laps later when a water pump failed and the Appleton, Wis., ace spun in turns three and four.
Trickle maneuvered to the outside around Smith but Regeth dove to the inside and took over the lead as they dashed to the finish line. Smith retired to the pit area and the race was now between Regeth and Trickle as every other car on the track was one lap down.
Running bumper-to-bumper, the veteran duo put on a thrilling show for the capacity crowd as Regeth chose the high groove while Trickle worked the lower.
Caution flags would slow the pace on lap 70 and again on lap 84.
Under the green again, Trickle would make his strongest bid at the lead on lap 90 when he and Regeth battled side-by-side as they raced down the back chute. Midway down the straight a lapped car occupied the outside groove. Neither Trickle or Regeth backed off a bit as they entered turn three and four door-to-door. Trickle gained the upper hand momentarily as the pair ducked out of turn four but Regeth used the inside lane to hold his advantage.
Trickle, clung to Regeth’s tail until dropping a leaded weight from his car, cutting the left rear tire and forcing him to the pits.
Regeth cruised the final four revolutions and finished a full lap ahead of Ed Sanger of Waterloo, Iowa and Fred Horn of Marion, Iowa.