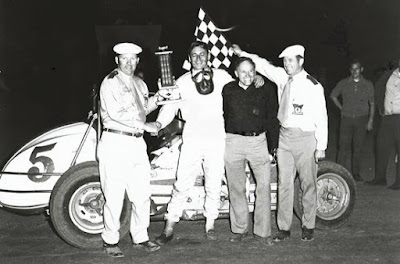 Topeka winner Earl Wagner is congratulated by Larry Shipley while car owner Hank Smith is all smiles and Woody Brinkman presents the checkers.

Topeka, Kan. (September 9, 1972) – Earl Wagner, the fast-driving plumber from Pleasantville, Iowa, slipped inside of Thad Dosher on the 20th circuit and went on to win the 25-lap IMCA sprint car feature at the Mid-America Fair on Saturday before 2,500 fans.
Until he skipped a bit high coming out of turn four, on that 20th lap, the day had belonged to Dosher, much to the delight of his hometown fans.
Driving the well-prepared R&H Farms Chevrolet, set up by Wayne House of Lincoln, Neb., Dosher removed one of the oldest records in the IMCA record books with a 23.44 second time trial lap.
The old record of 23.55 seconds had stood until since 1955 when a similarly damp, cloudy day Bobby Grim piloted the Honore Offenhauser to that record.
Dosher also set a 6-lap record of 2 minutes and 25 seconds in the trophy dash and Larry Cramblet of Macomb, Ill., got into the record act with a time of 3 minutes and 16 seconds in the first heat.
Dosher, who started sixth in the feature, needed just two laps to move into the lead. He stretched that lead to a wide margin over Jay Woodside of Kansas City until the red flag came out on lap 19.
Dosher elected to stay with the same tires during the lull and it cost him as both Woodside and Wagner passed him on restart.
Woodside, however, would exit on lap later with a broke rear end and Wagner was home free with his second straight IMCA feature win. He won his first of the season at the Nebraska State Fair on Monday, September 4.
Dosher would hold on to finish second while Roger Larson of Solomon, Kan., took third. IMCA point leader Ray Lee Goodwin of Kansas City grabbed fourth and Chuck Amati of Freeman Spur, Ill., was fifth.