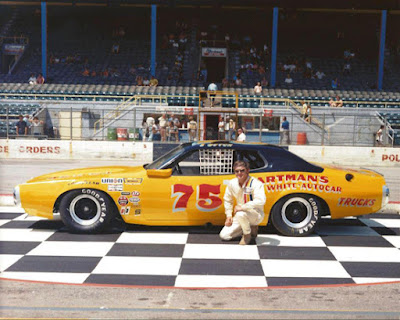 
West Allis, Wis. (September 8, 1974) – Butch Hartman led most of the day Sunday and seemed to know all the time he would win the Governor’s Cup 250-mile USAC stock car race - but he said it wasn’t that easy.
Hartman nipped Norm Nelson by four seconds to win as the pair evaded a spin-out by Dave Logan in the south turn of the final lap and finished under the yellow.
After Hartman took over the lead from polesitter Jack Bowsher on the second lap, the only time he gave up the lead was when he pitted during four of the 12 caution periods.
There were always little duels, with Don White and Bay Darnell specifically, but Hartman got his lead back and seemed to have little trouble holding it until his next pit stop.
“The first part of the race I was saving it,” Hartman told newsmen afterwards. “A 250-mile race like this is hard on the brakes and everything else. After 175 laps, I was running on less than half a pedal of brakes.”
“The last few laps I was running as hard as I could, all things considered. Norm’s and my cars were about equal. We were running so even, that if he would have been leading on the last lap, I don’t know if I would have gotten around him.”
Darnell finished a strong third despite a balky ignition system and White was fading fourth with slippery new tires. Hartman, Darnell and White all drove Dodge Charges while Nelson piloted a Plymouth as all four finished on the same lap.
Gary Bowsher, Jack’s 18-year-old son, was fifth in a Ford Mustang. Irv Janey was sixth in a Charger and Terry Ryan was seventh in a Chevelle, all one lap back.
There was some grousing afterward about a pit stop, or the lack of one, when Hartman zipped through the pit road without stopping on lap 165. The incident occurred under the yellow and Hartman roared into the pits passing the pace car, which was on the track. Then he stopped at the end of the pit road and pulled behind the pace car.


Hartman, who is connected to his crew by a radio, said he was told to pit. Then, when he was on his way in. the crew feared the green would come out on the next lap and told him not to pit.

“When I came in I was ahead of the pace car,” Hartman related. “When I got to the end of the pit road, I stopped to let the pace car go and then pulled in. Then, on the back stretch, I let all the cars ahead of me until I was back to my original position, so actually I didn’t violate the rules at all. I didn’t gain at all.”

Nelson backs Hartman on this. “He could have cheated real bad,” Nelson said, “but he waited for the pace car. I didn’t see Butch cheat at all.”

White, however, said the fact that Hartman didn’t gain by the trip through the pits was immaterial.


“Any time you come in the pit road, you’ve got to stop your car at the pits. It’s as simple as that.”

White intimated that the reason stock car supervisor Bob Stroud didn't penalize Hartman for the alleged violation was because of the defending three-time champion’s stature in USAC. Asked if he would protest. White asked “What good would it do?”

Asked if he would protest if he thought it would do any good, he paused and said, “Nah. If I was running second I would have.”

Three drivers were taken to Milwaukee County General Hospital for observation and released as a result of race mishaps.


Roger McCluskey and Paul Feldner tangled on the fifth lap for the first yellow when McCluskey’s engine blew. Feldner hit the wall trying to avoid McCluskey’s spilled oil and bounced back to clobber McCluskey’s car. Feldner was only shaken but hospitalized for a routine check of tender spots in his wrist and side. McCluskey had his hip X-rayed and cuts on his eye treated before being released.

Ramo Stott was treated for first degree burns on his face, neck, and hands and released. His car blew its engine on the 86th lap around the mile track and burst into an oil fire that engulfed the car. He jumped from the car unaided.