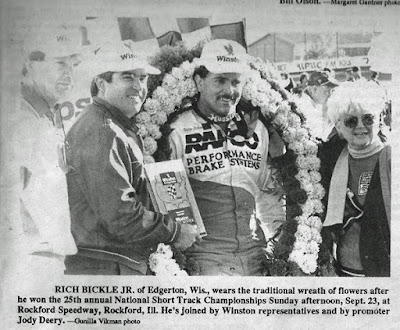 Rockford, Ill. (September 23, 1990) – Rich Bickle Jr. of Edgerton, Wis., captured the 25th annual National Short Track Championships 300-lap feature on Sunday afternoon at Rockford Speedway.
Bickle held off Mike Garvey of Brooks, Ky., by less than a car length in taking the crown. Randy Porter of Greenville, S.C., Bryan Reffner of Wisconsin Rapids, Wis., and Larry Schuler of Minooka, Ill., completed the top five finishers.
“I grew up at this track and this is the race I’ve wanted to win all my life,” Bickle said in victory lane. “This makes my whole year. To first make the Daytona 500 and then win this is really something.”
Indeed, Bickle began coming to this event back in the 1960’s when his father Rich Bickle Sr., competed on a regular basis. The younger Bickle ran his initial National Short Track Championship event in 1979, lasting just five laps before having to park his Ford Granada.
Sunday was much different, however, as Bickle motored from deep in the pack to take the lead from Reffner on lap 261 and then hold off Garvey for the win.
After a poor qualifying run and a mechanical failure in Saturday’s qualifying races, Bickle started the event in the 26th spot on a promoter’s option.
Up front, Reffner grabbed the lead from his outside starting position and led the first 83 laps. During that period, the caution flew five times with perhaps the most important coming on lap 106 when Bill Venturini tagged the turn three wall.
At that point, Bickle ducked into the pits for his mandatory pit stop. It was a strategy that would ultimately give him the win.
“We talked about making our pit stop on the first caution and decided to do it right away because we were starting in the rear anyway,” Bickle said. “Later on, I knew that I was pretty much leading the race even though I was running seventh. Everybody in front of me still had to make a pit stop.”
Garvey became the first driver to post a qualifying speed of under 13 seconds in a four-lap average. He made his pit stop at lap 227 and came up short of Bickle at the end.