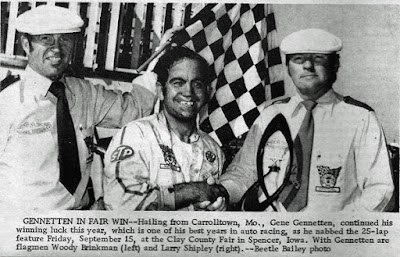 Spencer, Iowa (September 15, 1972) – Gene Gennetten of Gladstone, Mo., put it all together, “finally”, as he breezed to victory in the 25-lap IMCA sprint car feature at the Clay County Fair on Friday night before 3,500 appreciative fans.
Genetten, an IMCA veteran of three years, made his first trip to victory lane and became the 12th individual feature winner this season in IMCA.
Seemingly crucial to his victory was the fact that he had the pole position for the feature and the racing surface was hard and slick. Any hopes of setting records vanished on the third lap when a spin-out in turn one caused the yellow to come out and a fast pace quickly settled down.
Earl Wagner of Pleasantville, Iowa, after winning two features in his last three outings, had his hopes dimmed as engine trouble forced him out of competition after only three circuits.
Ray Lee Goodwin of Kansas City, the current IMCA point’s leader, finished second after driving a steady, safe race.
Dick Sutcliffe of Kansas City and Chuck Amati of Greenfield, Tenn., second and third respectively in points, did not gain any ground on Goodwin as Sutcliffe finished fourth and Amati was a disappointing ninth.
Eddie Leavitt of Kearney, Mo., turned in the fastest time of the day in qualifying with a 23.73 second clocking on the half-mile.