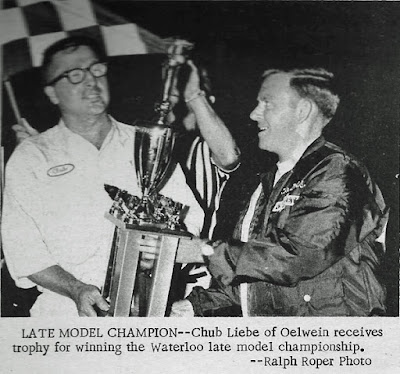 Waterloo, Iowa (September 7, 1969) – The 1969 racing season was brought to a close on Sunday at J.L. Tunis Speedway, with a veteran of many years on the dirt ovals, claiming the 50-lap season championship.
Jules "Chub" Liebe of Oelwein, Iowa, a former IMCA star, drove his usual steady race to win the 21st consecutive season finale.
The championship saw Karl Sanger of Waterloo, Iowa, jump from his outside front row position into the lead on the first lap, and began to pull away.
One of the pre-race favorites – and leader in the point standings, Curt Hansen of Dike, Iowa, had his hopes of a high finish washed away quickly, as internal engine injurie sidelined him for good after only five circuits.
Ty Burger of Cedar Falls, Iowa, who started on the outside of the second row, moved into second behind Sanger, and remained a strong contender until he left the race with what appeared to be a faulty water pump.
Sanger had built a comfortable lead when, on lap 19, Tom Hamilton of Independence, Iowa, spun on the fourth turn, and Sanger hit him, bending the tie rods on his 1964 Ford, and knocking his wheels out of alignment.
This shortened Sanger’s lead, as on the restart, the current runner-up, Liebe, got the jump on Sanger, and moved ahead to stay for the final 30 laps.
Lynn Idler of Ionia, Iowa, also proceeded to get past Sanger and after a hard-fought battle for seven or eight laps, moved his 1966 Oldsmobile past to secure second place.


Larry DeFrance of Marshalltown Iowa, leaving a steady stream of blue smoke from his 1966 Pontiac, also got by Sanger in the waning laps to claim third place.