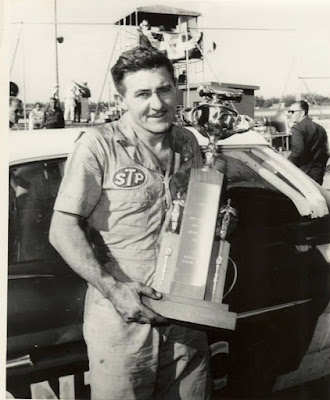 
Lincoln, Neb. (September 11, 1959) – Auto racing fans got a lesson in how-not-to-drive one’s automobile Friday at the Nebraska State Fairgrounds.
Those who were expecting to see shiny late model cars in top condition were disappointed. The cars were of late model stock, but most of them looked like they passed through the wringer at the laundromat.
Appearance, however, is not what these cars are judged on. Speed is the important factor in one of these events.
Ernie Derr of Keokuk, Iowa, had plenty of speed and savvy as he piloted his auto to victory in the 200-lap, 125-mile International Motor Contest Association international stock car race before 9,000 fans.
Derr, the IMCA point leader, won a fierce battle with Darrell Dake of Cedar Rapids, Iowa, for the top spot. Derr drove his 1957 Pontiac to victory with Frank Lies of Wichita, Kan., in a 58’ Ford, edging hard-luck Dake for second place.
Dake drove a 1957 Chevrolet convertible and held the top spot for 144 laps. He moved in front on the first lap and kept it there until he went in for a pit stop.
Derr, who had stopped for a 10-second refueling job on lap 59, took the lead as Dake was in for nearly 30 seconds. After that, it appeared as though Derr had won the race handily.
Then came the drama…
Derr, with less than 20 laps remaining, signaled to his crew for a pit stop; he was out of oil. Dake was close enough he might have the time to catch Derr on the stop.
But Dake’s luck ran out. Just before Derr pulled into the pit area, Dake’s car locked into gear, throwing him into a spin in turn #1. With the yellow flag out to rescue Dake, Derr took his stop in easy time.
Dake got rolling again but on lap 197 had to stop again, this time for gasoline, having taken a light load on an earlier pit stop.
Derr’s winning time was 2 hours, 38 minutes and 44 seconds. This included several laps run under caution in the early stages.