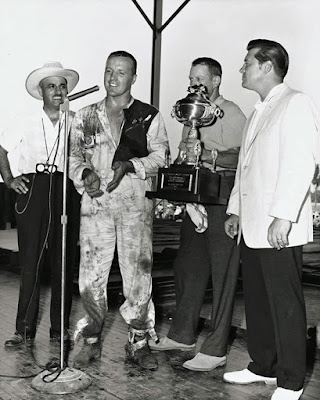 Du Quoin, Ill. (September 5, 1960) – Jim Packard, an exciting driver making his first appearance at the Du Quoin State Fair, won the hearts of 17,000 racing fans even though he finished fifth behind winner A.J. Foyt of Houston, Tex.
Packard, out of Speedway, Ind., and driving the Stearly Motor Freight Special from Collegeville, Penn., raced high on every turn with such reckless abandon that he wore out his right rear tire in 75 laps and had to make a pit stop which cost him the lead and the race.
Even after the pit stop, Packard kept racing as if he had a chance to win. He came out of the north turn so hard one time that he banged into the rail and sent the railbirds scattering away from the fence. Packard would keep his car under control and roar down the homestretch.
Foyt, driving the Bowes Seal Fast Special from Burlingame, Calif., collected first-place money of $4,165 with a time of 1 hour, 4 minutes and 16 seconds for an average speed of 93.67 miles per hour. The race was slowed for about 10 laps when Gene Force of Richmond, Ind., spun out of control on the north turn. The delay kept Foyt from breaking the race record of 1 hour, 3 minutes and 19 seconds set by Johnny Thomson in 1958.
Don Branson of Champaign, Ill., shattered the time trial record 35.37 seconds with a 34.46 second clocking that figured out at 104.47 miles per hour.
The first 25 miles were void of excitement as Branson, Lloyd Ruby, Foyt, Jim Hurtubise and Tony Bettenhausen held the first five spots. Rodger Ward, the 1959 Indianapolis 500 winner, got as close as sixth before leaving the race long before the halfway point.
Branson, ahead by as much as half a lap for the first third of the race, kept on the front for the first 50 miles, but Packard was roaring up from the rear as his daring maneuvers kept picking off one driver after another until he was running second.
Packard passed Branson in the south turn on lap 57 by going almost full throttle into the turn, taking the high side past Branson and then stepping on the gas to zoom ahead on the straightaway. Branson, who later said his motor was sputtering, was never a factor again and finished eighth.
It was Packard, Foyt, Hurtubise, Branson and Bettenhausen after 70 circuits with Packard pulling away so fast that he lapped fifth-place Bettenhausen on the 72nd lap. At this stage Hurtubise started slowing down and finished 13th.
Packard was racing well out front through 76 laps but was on very thin ice. His big right rear tire was worn to a frazzle and it finally gave way as he came out of the south turn. He made it to the pits, however, for a quick tire change but he was never a factor in a bid for the lead.
Foyt, who was never worse than third from start to finish, moved into the lead by process of elimination as first Branson then Packard faded from contention. Once in the lead, Foyt got a break when the caution flag flew, and the field had to hold their positions for 10 laps.
The winner finished virtually a lap ahead of runner-up Bettenhausen, who drove a steady but unspectacular race for second-place money despite the handicap of a burned right arm damaged when his car caught fire in Milwaukee last week.
Finishing behind Foyt and Bettenhausen were Al “Cotton” Farmer of Indianapolis, Eddie Sachs of Center Valley, Penn., Packard and Ruby.
The total purse for the race was $20,310.