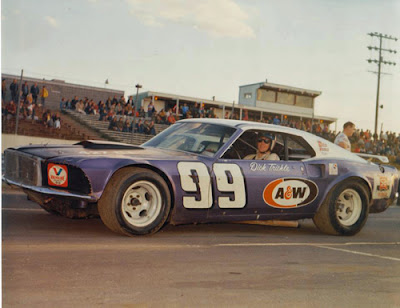 
Trickle won the race after trailing two of the South's finest drivers, Pete Hamilton of Atlanta, and Bobby Allison of Hueytown, Ala.


The 300-lap grind started with pole setter Tom Reffner of Rudolph, Wis., taking the lead in his Mustang. On lap six Hamilton moved his 1967 Chevy II passed Reffner and into the lead. Reffner retired four laps later with a sick engine.


Once in the lead Hamilton began to move out and away from Willie Crane of Springfield, Mo.


Local favorite Terry Bivins of Shawnee, Kan., moved his Chevy Nova by Crane and into second place on lap 35 and set his sights on Hamilton.


Hamilton, the 1970 Daytona 500 champion managed to stave off Bivins when, on lap 87, the yellow flag was displayed as a multi car crash occurred in the high banked third turn. Ferris Collier of Kimberling City, Mo., slid into the concrete retaining wall sending several cars spinning out of control. Collier, Bob Williams of Independence, Mo., and Bob Senneker of Dorr, Mich., were unable to restart the race.


Bivins remained within a second of the leader, Hamilton, until lap 136 when entering the first turn his engine locked, sending him crashing through the three-foot concrete retaining wall. Bivins was unhurt. With the red flag displayed Hamilton still held the lead with Trickle in second and Allison in third in his ‘73 Camaro.


Officials penalized Hamilton one lap for working on his car while the red flag period was still in progress. This moved Trickle (winner of the 1972 300) into the number one spot for the first time.


When racing got underway once more, Trickle was pressured by Allison. They do old through traffic until Allison maneuvered into the lead on lap 193.


On lap 234, after pulling out to a 4-second lead, Allison retired to the pits with a blown engine. On lap 235 Trickle suffered a blow out on his right rear tire and hurried to the pits, with Hamilton re-assuming the lead.


When trickle got back on the track he was 1 1/2 laps behind Hamilton. On lap 263, Pete encountered a flat tire, sending him to the pits. Trickle sped by twice during that time and was back in the lead. But just five laps later Trickle again was troubled with a flat tire sending Hamilton back into the top spot.


An accident on lap 272 brought out the caution flag for the fifth and final time, with Hamilton in first place, Trickle in second, and Jim Bickerstaff of Mineral Ridge, Ohio, in third. On lap 277, with the caution flag still out, Hamilton suddenly stopped on the front stretch to talk to his pit crew. This incident moved Trickle back into the top spot as the green flag was unfurled.


Hamilton had a 10 second deficit to make up in only 20 laps but on lap 284 it all came to an abrupt end for Pete as his engine in his racer let go, retiring him to the pit area.