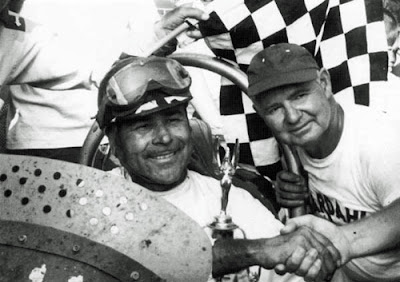 Pete Folse and Hector Honore were a unbeatable team.

Lincoln, Neb. (September 6, 1959) – While other drivers were having their troubles, Pete Folse continued his domination of IMCA sprint car racing before a capacity crowd of 17,000 at the Nebraska State Fairgrounds on Sunday.
“Pistol” Pete was in the cockpit of Hector Honore’s powerful black Offenhauser and he swept the program; setting fast time, winning his heat and match race, and the 20-lap feature.
Other top names, notably 1949 Indianapolis 500 winner Bill Holland and Arnie Knepper, a leading contender this year, had difficulties.
Knepper’s car, flattened front and rear by a double flip at the Iowa State Fairgrounds last Sunday, was nursed through a couple of races and then broke the rear axle on the first lap of the feature.
Knepper got his car high up on the track and on turn three, jumped out and started to wave cars by. Bert Hellmueller of Louisville, Ky., and Harold Leep of Wichita, Kan., both spun attempting to avoid Knepper.
The spin caused a complete restart, which Folse won without further incident. The mustachioed Folse, of Tampa, Fla., took the lead immediately after getting the green flag from starter Gene Van Winkle, and held about a quarter-lap margin over Herschel Wagner of Hickman Hills, Mo., all the way.
Wagner, a feature winner last year, had no problem holding on to second place over Johnnie Poulsen of Gardena, Calif., Jerry Blundy of Galesburg, Ill., and Leep.
Holland’s troubles were an oil leak, which forced him out on the second lap of the first heat, the black stuff covering his trousers and spattering his goggles. His mechanics got the car going again for the third heat. He hung back for five laps, testing the car, and then pulled into the pits again. This time the trouble was a lack of gas. In the rush to fix the oil leak, the gas tank had gone unchecked.
Holland went back into the consolation race, and this time led all the way, winning the 10-lap grind. But he was not satisfied with the car’s performance and scratched from the feature.
Folse’s 5-lap victory in the match race provided the only new record of the day. His time of 2 minutes and 42 seconds bettered Bobby Grim’s 1957 mark of 2 minutes and 44 seconds.