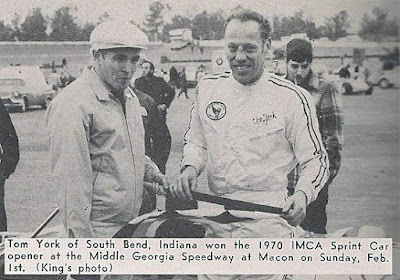 York, starting on the outside of the front row, jumped into the lead at the wave of the green flag and was never headed. Don Mack, behind the wheel of the Campbell Chevy, took the checkered flag for second-place money. Third-place honors went to Florida’s Wayne Reutimann driving the Kash & Karry Chevrolet.

There was no time for the feature due to the caution laps. In one incident, Jan Opperman crashed into the second turn wall when he hit an oil slick after Jay Woodside blew an engine.

Reutimann turned in fast time on the day on the half-mile banked track with a one-lap clocking of 18.845 seconds. Harrison turned in second fastest time of 19.117 seconds.