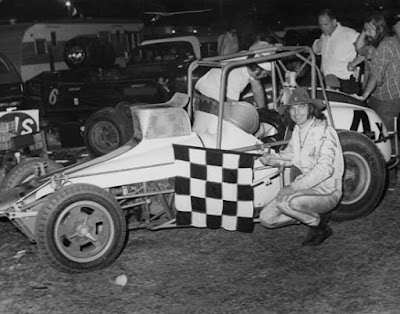 USAC star Duane “Pancho” Carter who smacked the wall and caused a restart on the first lap, challenged Opperman repeatedly on the turns and appeared at times to have a wheel in front. Experience paid off in the end as the smooth driving Opperman sailed along while Carter was fighting off handing issues.

Jay Lyle was a distant third, really out of the race between the two front-runners.

Opperman was lavish of his praise for Carter, the driver who gave him the most problems in the feature.

“Pancho is a super race car driver,” he said, catching his breath after his epic battle. “He’s a real gentleman, quite a boy.”

But Opperman was not so kind in his comments about the track. While there was a bit of cushion, piled clay in the turns, the straights were something wild.

“I had to go half-throttle on the backstretch,” he remarked. “I was going all over that track.”

Later in the pits, both he and Carter agreed that the track was something they had never experienced before.

“How about that hole in the third turn,” exclaimed Carter. I was hitting it so hard that the rear end of the car was bouncing up and breaking my seat.”

The consolation was the thriller of the afternoon. Eight cars were wrecked in to four-car tangle. No one was hurt.

In the first incident, coming out of the fourth turn, young Jimmy McElreath ran into a gaggle of three spinning cars and did a half roll with his cage slamming into the outside wall.

A few laps after the restart, four more cars collided in the first turn as Gene Gennetten lost his steering completely. Ralph Liguori, with no place go, clipped one of the spinning cars and went up in the air in three complete rolls.

“Why did it have to happen to me?” a shaken Liguori asked afterwards. “Someone else loses his steering and I’m the one to flip.”