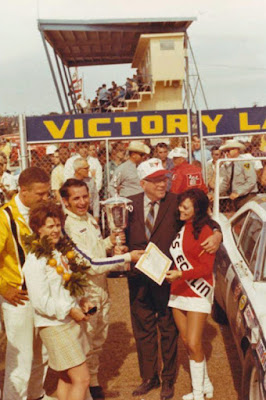 Ramo Stott is joined by his wife Judy and ARCA owner John Marcum after winning the 300-miler.

With only seven miles remaining in the race, Bobby Watson of Prestonsburg, Ky., was running second and Stott third with a bare car length separating the three.

Katona blew a tire on his 1969 Dodge and went into a wild spin. Stott took advantage of the situation to scream past both Katona and Watson and take the lead.

Stott, 33, then beat Watson across the finish line moments later to win the closest finish in seven of these high-speed chases at Daytona for drivers of the Midwest-centered Auto Racing Club of America.

It was the first victory for one of Chrysler’s new winged Plymouth “Superbird.” Watson drove a similarly – designed Dodge Daytona.