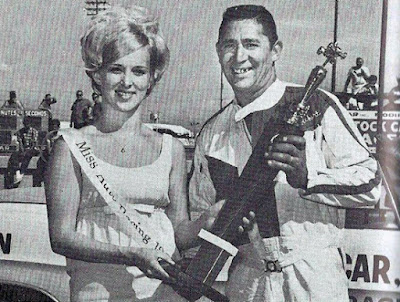 Jerry Richert is presented his trophy by the Winter Nationals speed queen after winning the series' opener.

The gamble was that he could take the high road - top of the track – and fortunately there was just enough weight to the dirt to give him the necessary acceleration on that one lap to make the winning pass.

After that, the dirt turned to dust and a fly would have skidded off the rim of thee track.

It was the big one for Richert and the Frank Wagner Chevy, although he did place third in the second heat as the annual Winter National Sprints opened a five-day stand at the Tampa fairgrounds.

Dick Sutcliffe of Kansas City finished second and Jerry Lipinski of St. Paul, Minn., who also turned in the fastest time at 27.86 seconds on the half-mile dirt, was third and the victim of Richert’s gamble on the restart.

Happy about his win but not too pleased about the track conditions, Richert said after his victory he was sure he would “sure like to see them let us use our knobs so we can show the spectators the way race use to be”.

He was referring to the knobby tires that dug deep into the clay, loosened it, and gave drivers a big bite at the top of the track.

“It was pretty much one-groove out there, unless you’re exceptionally good,” he added.

The 30-lap main event was slowed twice due to caution flags, first when Wayne Reutimann spun and secondly, when three cars tangled wheels in the north turn on lap 20. The only damage both times was bent machinery, although it took Tampa’s Buzz Barton, Jon Backlund of Kansas City and Barry Kettering of St. Paul, Minn., out of action.

Heat winners were Ray Tilley, Clearfield, Penn., Earl Halaquist, Sidney, N.Y., and Kettering. Tilley won the match race and Reutimann, who enjoyed and suffered about everything that could happen to a driver, won the consolation. He flipped his car in the second heat in addition to spinning in the feature.