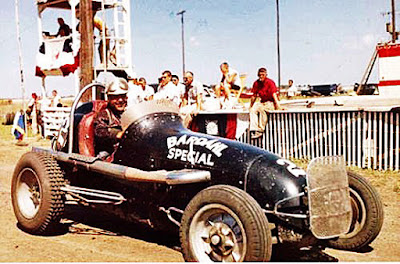 Tampa, Fla. (February 17, 1962) – Pete Folse came from behind to nail the Florida State championship by winning the 25-lap finale on Saturday to boost his point total by 100 tallies.

Folse went into the feature tailing Herschel Wagner, Johnny White and Jerry Richert. Wagner ran second for three-quarters of the race and that spot would have given him the title and trophy. The loss was a bitter pill to swallow for the Hickman Hills, Mo., driver and his fourth place finish left him 10 points shy of Folse’s 350 total. Neither White nor Richert netted any points in the feature.

Folse had some anxious moments in the closing laps, as Johnny Rutherford, a young driver from Fort Worth, Tex., was gaining on the leader consistently. Afterwards, Folse said he heard a car behind him but thought it was a lapped car. When he finally realized the car was a contender, Folse sent his foot to the floor on the Honore Offy and used the remaining cushion to pull away.

Rutherford said he heard Folse’s engine respond but believed had the race been a little longer the ending would have been reversed. Arnie Knepper was a close enough third to make it a three-car battle.

The race had a red flag on the second lap, with Jerry Blundy, Gordon Woolley and Mickey Shaw getting involved in a fracas.

Folse, Wagner and White ran knobbies while the rest of the field used the wide tire. The result was a really bunched up field of cars and no true groove. As one lapped driver put it, “Every driver had a different groove and he didn’t know where to make room for a car to lap him.”

Once again, the weatherman smiled on another banner production of Al Sweeney of National Speedways, Inc.