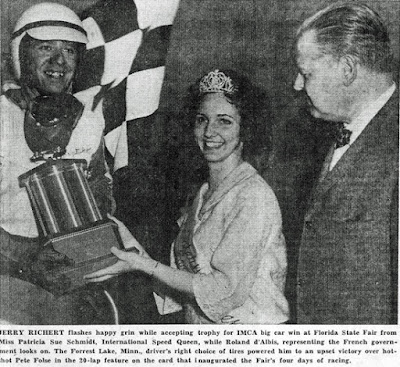 Tampa, Fla. (February 7, 1962) – A split-second decision in the pits that didn’t pan out, two spine-tingling flips featuring the “May and September” of racing, and the absence of a cigar-chewing veteran driver played a key role in the opening day of the Florida State Fair IMCA races on Wednesday afternoon.

It was the wrong selection of tires that may have cost three-time IMCA champion Pete Folse hiss second Florida feature loss in two years. It did allow hard-driving Jerry Richert of Forest Lake, Minn., to cop the first big day of racing on the Plant Field half-mile.

Richert won the 20-lap feature on the 19th loop, nosing out last year’s strong finisher, Johnny White of Warren, Mich. Johnny Rutherford of Fort worth, Tex., always a bridesmaid but never a bride at these Florida events, powered his way to a third-place finish in the Beatson Chevy, while Folse, driving the almost legendary Honore Bardahl Special, finished a puzzled fourth.

Folse, soundly beaten, still managed to flash is credentials at the finish line – his big, broad, “wait until next time” grin. But he failed to list a definite reason as to his loss.

“Main reason,” said Folse, “was I couldn’t get enough bite on the track. No, it wasn’t the tires. Actually, I don’t know what other tires I would have used.”

Folse had won the second heat of the day and the trophy dash both in high fashion, using knobby tires. He had found a cushion on the high side of Plant Field half-mile and was riding the groove all the way.

“And that’s the way I had planned to run the feature as well,” he added.

Richert, however, had planned to run the feature a little differently.

“I was using I.V. slicks, and decided to stay on the pole the whole way,” he said.

“I sort of felt that Pete couldn’t keep the outside groove, that track changes too much after every race. About halfway through, I could see he was running out of cushion.”

Folse didn’t, and finally with several laps remaining, the smooth-driving Tampan edged his car down to the pole, hoping to block anymore cars from coming through while holding onto fourth position.

Despite the fact that the majority of drivers felt this was the strongest Tampa racing field ever, there was a definite void in the events. It was the absence of Buzz Barton, Folse’s shadow for the last three years.

And, it was not unreasonable to assume that many of the 5,200 spectators on hand had traveled just to see one of their classic duels.

Richert’s brilliant driving, however, almost made most of them forget.