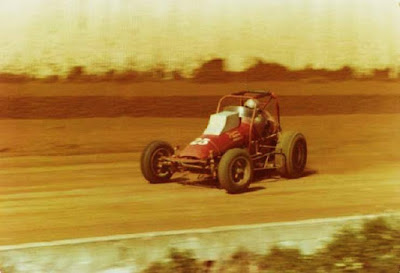 Darryl Dawley powers through the turn en route to his first Winternationals victory.

Tampa, Fla. (February 12, 1975) – Darryl Dawley was so excited after winning the feature race at the Florida State Fair Wednesday night, that he ran away from photographers, fans and sports writers and disappeared into the darkness of the pit area.

But when he was finally cornered, the Sioux Falls, S.D., admitted that it was because it was the first time he has won a feature in the Winternational Sprints in the five years he’s been coming to Florida.

He was almost passed by Ralph Parkinson Jr., at one point, but managed to pull away when heard the latter’s engine.

Dawley said the track was a little greasy going into the corners but liked the generous groove it presented. It rained an hour before the races, delaying the program for about an hour but the showers worked well for the racing surface.

Parkinson came through to finish second and a hard-charging Joe Saldana finished third.