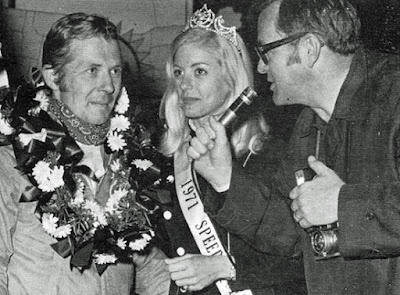 Tampa, Fla. (February 10, 1971) – The cold weather on Wednesday did not bother Eddie Leavitt of Kearney, Mo.

He walked into the Florida State Fairgrounds that morning with a 102-degree temperature but walked out that night with the trophy that went with winning the 30-lap IMCA sprint car feature during the Winternational Sprints.

That wasn’t the only handicap he had to overcome. He smacked the wall during the trophy dash and his car was so badly damaged it had to be lifted up and brought back to the pits on a wrecker.

But his crew got the car back together in time to make the main event.

In spite of a record 40 degree temperature and what Al Sweeney, National Speedway, Inc., promoter can recall, the coldest race day in 35 years, a crowd of 2,200 attended and were treated to one of the liveliest series of events to begin the 1971 season.

The feature was led variously by Bob Kinser of Bloomington, Ind., then Chuck Amati of Greenfield, Tenn., and finally by Leavitt. Kinser stayed right with Leavitt until the late laps, when Leavitt started lapping the tail end of the field beginning on lap 12.

Leavitt stood in the middle of the track, holding his trophy when a rush of youngsters came out of the grandstand to shake his hand. It was obvious that he was more pleased with the small fry than the grownups.

In spite of an exhausting day, starting with a visit to a doctor for a shot for strep throat, he stood still for an interview a long picture session with Speed Queen Barbara Clack, and to receive congratulations from the numerous race fans.

Leavitt also had the quick time in qualifying, circling the half-mile clay oval in 24.469 seconds.

The finish of the race was Leavitt, Kinser, and Jerry Blundy, Galesburg, Ill., in that order. The race was run off in 14 minutes and 7.03 seconds, the fastest feature of the series to date.

The action started early when eight cars were caught in a spinning tangle during warmups. The machines of Roger Rager and Don Hewitt were both damaged.

Leavitt tagged the wall during time trials and made only a single lap, coming in to check the car out. But in spite of that, he still had the best time on the clocks.

Eight cars spun on the first lap of the consolation. Cliff Cockrum, Mitchell, Ind., and Buzz Barton, Tampa, were both knocked out of action for the evening.

Then, after a restart, Bill Burk Jr., Marion, Ill., the IMCA rookie of the year, got into the wall, bringing out another yellow flag.