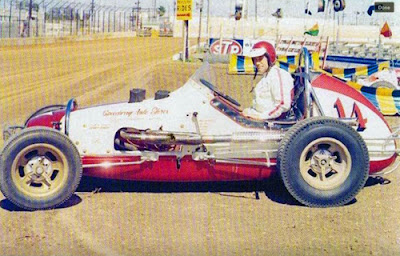 Tampa, Fla. (February 14, 1968) – Benny Rapp didn’t get a single Valentine but ended up the sweetheart of Plant Field on Wednesday – for a while.

The 40-year-old Rapp came back Wednesday as the dust settled from the 30-lap IMCA sprint car race at the Florida State Fairgrounds and a voice broke through the throng of congratulations,…” all right old man, that’s enough.”

Rapp, after winning his first feature at Tampa, was just coming up for air from his second kiss from pretty IMCA Speed Queen Bernadette Juanich.

It was another kind of brakes, however, that put the sunned-tan Toledo, Ohio, chauffeur out front to stay. Rapp had started the feature on the pole but sitting next to him was IMCA’s most respected driver, Jerry Richert.

Richert, with two feature wins already to his credit in the young season, seemed to be a heavy favorite to win despite Rapp’s sizzling qualifying mark of 26.23 seconds he set in time trials.

As expected, Richert quickly grabbed the lead at the start and Rapp fell in behind him, with dust that almost obscured the track.

Halfway through the race Rapp got his break. Richert broke a drive line and had to be towed to the pits. For the next 15 laps Rapp made the rest of the field eat his dust.

Gus Linder, the hard charger whose probably passed more car than anyone else in the four programs, finished second and Ralph Parkinson took third.

The tricky half-mile dirt proved many a guesser wrong as it started out fast and ended up slow towards the end.

Among those who guessed wrong were IMCA standouts Richert and Karl Busson as well as local hopefuls Wayne Reutimann and Bill Roynon. Richert did make the show, however, by borrowing Jerry Weld’s car.