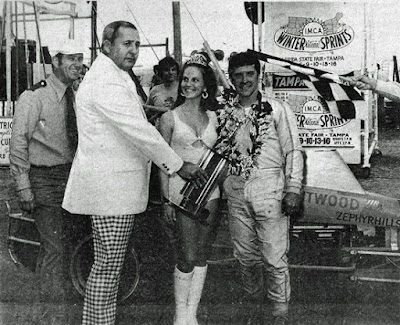 
Tampa, Fla. (February 16, 1974) – Experimenting with something new, Lee Osborne of Lebanon, Penn., won the 50-lap Winternational Sprints finale on Saturday afternoon before a crowd of 6,600 at the Florida State Fair.

The something “new” was a torsion bar suspension to springs and Osborne was not clear whether he won because of them or in spite of them.

The win probably came because, as he said, “The track got black (with rubber) towards the end.”

It was towards the end, on lap 38 of the 50-lapper, that Osborne gained the front position.

The driver stated that the experiment was still far from satisfactory and he had…” a lot of changing to do. The suspension is still too soft.”

Bill Utz, who came from last position twice, once at the original start and again on a restart after a minor accident blocked the track, finished an impressive second. But it was an hour after the checkered flag had dropped that Utz was assured his position. The race was protested by Ray Lee Goodwin, who claimed that Utz did not go completely to the rear of the field, his assigned position, on the restart.

IMCA officials ruled that although he may have been ahead of two cars on the restart, they were cars involved in the same accident and all were assigned to the rear at the restart.

Goodwin, who challenged throughout the race, but never managed to get in front, finished third.

The program started under clear skies after a rainy morning. The rain did a good job of wetting down the clay surface. But a brisk wind and a hot afternoon sun changed the track from wet and tacky to a dry-packed surface midway of the feature race.

Once it dried and the field of 24 cars started laying rubber down, the field did an about face. The front runners early, drifted back and a new set of chargers shot to the front.

It was then that Osborne found the low groove to his liking and threaded through from about halfway back in the pack.

But the real workhorse of the race was Utz, the cigar smoking former blacksmith, who picked off one car after another in a furious charge to second place.

The overall winner of the Winternational Sprints was Jan Opperman, who had won the first three feature of the series and finished second in the fourth race of the series. Saturday, he wrecked his own car, then changed to two others before he qualified for the feature and finished 10th.