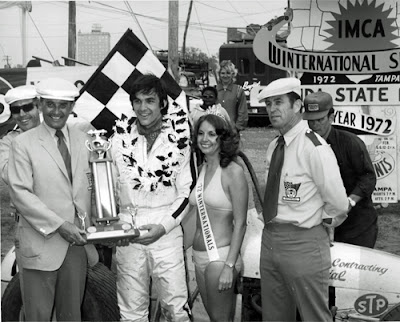 Tampa, Fla. (February 13, 1972) – It was a repeat performance for Billy Cassella on Sunday, as the curtain fell on the Winternational Sprints at the Florida State Fair.

As he did on Saturday, the dark-hared West Virginian driver led from green to checkered in the feature race. It was a shorter race, 30 laps, but apparently just as tiring as Cassella asked someone to hold the big trophy while he was waiting for Winternational point champion Jerry Blundy to show up for the picture session.

But Blundy did not show. He was already on his way to the airport to catch a plane back to home base, Galesburg, Ill.

The feature race was one of the calmest of the series, caused by a narrow groove that limited passing. Cassella admitted the groove was tight.

He had little trouble during the running of the race, except for running into heavy traffic as he caught up with a gaggle of slower cars. Once, Jan Opperman attempted to pass Cassella in traffic but settled back to claim second-place.

Early in the race, Opperman and Blundy worked each other over for a couple of laps, banging wheels as they few down the backstretch and nearly put each other into a spin. Those were the only fireworks of the race.

The paltry crowd of 2,500 did some breath catching in the consolation.

Leroy Felty did a half spin and crowded Bill Burk Jr. The latter’s car jumped into the air, did a half turn and cracked into the wall. Burk was stunned momentarily but suffered nothing worse than a leg bruise.