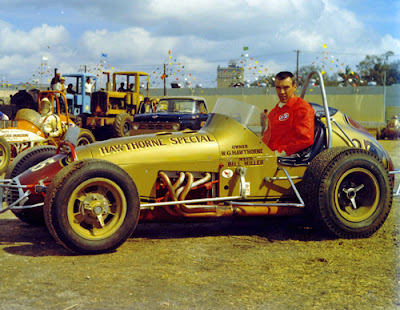 Tampa, Fla. (February 2, 1970) – Bobby Adamson, who does his best in the final days of the Florida State Fair races, turned the timetables around, winning the 25-lap feature, the 6-lap match race, and finishing second in the 12-lap consolation at the opening program for the National Winter Sprints.

For the last two years, Adamson has won the final feature of the Fair series, but Wednesday, he ran a perfect race before a half-frozen crowd of 3,500 hard core race fans in the grandstand.

It was a tough one to win, with six yellow flags slowing the race and bunching the field, taking away the cushion that Adamson had built as a lead each time. The yellow flags came out for spinouts by single cars, except for one time when Jim Moughan and Thad Dosher spun coming out of the fourth turn and Moughan’s car getting a little bent out of shape.

The lanky Adamson said he had trouble in his heat race because he had thee wrong tires on the car, but all that changed with different tires for the feature.

“The track was beautiful once we got the setup right on the car,” he grinned. “My car felt so good I can’t explain it.”

He got the lead on the first turn from his pole position and he was never headed, not even threatened. Each time the field was released on a restart, Adamson would roar away to open up a substantial lead again.

The feature was the most interrupted race of the day and 15 of the 25 laps were run under the caution flag. Even in the final laps, when the yellow flag laps were not counted as part of the race, the field was slowed to a crawl.

The final flag came on the white flag lap, signaling one more lap to go, and when the green flashed, a dog fight developed between three cars for the runner-up spot.

J.D. Leas turned in the fastest time in qualifying, caught by the clocks at 26.71 seconds for the trip around the half-mile clay oval.

With a wet track in the morning, the time trials were moved to the afternoon and the cars were put on the track at the rate of two at a time to keep the program from lagging.

It was Adamson all the way in the 6-lap match race and Chuck Lynch got the jump from the pole position to capture the 12-lap consolation.