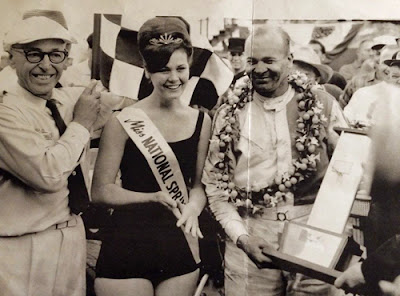 Steve Ungar of Garrettsville, Ohio, is joined by Speed Queen Anne Harris after his upset victory in the IMCA Winternationals opener at Tampa. Starter Johnny Hicks presents the checkered flag.

Tampa, Fla. (February 11, 1967) - Steve Ungar, a balding 39-year-old from Garrettsville, Ohio, who does most of his racing in super-modifieds, turned a lot of firsts into first place in the rain-delayed opening day feature of the IMCA Winternationals sprints at the Florida State Fair on Saturday.

A turn away crowd saw Ungar flip while attempting to qualify early in the afternoon but came back later to set fastest time of the day with a lap of 26.77 seconds on the hard and slick half-mile clay oval.

Oddly, it was the first time he had driven the Long Brothers #55 Chevy and his first ride at the track.

“I was wondering if I would even qualify for the feature,” said a grinning Ungar, surrounded by well-wishers, and still carrying a lipstick print from a kiss by Speed Queen Anne Harris. “The car handled real good, I didn’t have any trouble.”

Ungar explained after his flip that he had tried to go too deep into the first turn during his first qualifying attempt and the car went into a drift. It was too far gone for him to correct, and he went over three times.

Not so lucky was Bill Brown of Denville, N.J., who made five rolling end-over-end turns on the same corner during the consolation. Brown’s Chevy was demolished, and he was removed unconscious and taken to an area hospital where he was released after overnight observation.

The crowd of 10,638 was the largest crowd ever to witness an IMCA race here, topping last year’s opening day crowd by 335 admissions.

It was a bad day for a lot of drivers, with almost every race stopped because of spinouts or accidents.

The track, after a heavy morning rain, got faster as qualifying stated to unfold, and the top 20 in IMCA points, allotted the first 20 qualifying spots, found their times exceeded by the late timers.

Jim Moughan, second in points for 1966, qualified the Honore Black Deuce 40th fastest and missed the feature. And for the first time in IMCA history, the champion, Jerry Richert, failed to make the feature, running the consolation and failing to finish.