1972 – Opperman a Winner at IMCA Winternationals 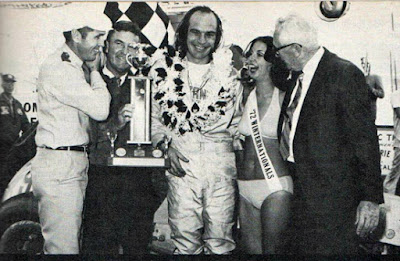 Tampa, Fla. (February 5, 1972) – Jan Opperman, the driver with the long hair, won the 30-lap feature Saturday, round two of the IMCA Winternationals Series at the Florida State Fair and thanked the Lord he had the strength to finish.

He didn’t say that casually, as would many, he meant it sincerely.

“I give credit to the Lord,” he said, after standing patiently for the cameras in the winner’s circle. “I like to witness for Him. He sure has changed my life.”

Opperman needed the strength because his car was acting up during the final six circuits and was…” beating me to death.”

To the numerous fans in attendance, Opperman appeared to be in complete control after taking the lead on lap 6 from his 11th starting position. After grabbing the top spot, he stretched out to substantial lead, then stretched it twice more when cautions bunched the field after slower cars spun out.

It was a good day for the self-styled “hippie,” a follower of the simple, quiet life until he climbs into the cockpit of a race car. He also won his heat race to qualify for the main event.

While Opperman rode serenely in the lead throughout most of the contest, Amati and Blundy carried on a dogfight for the runner-up spot. Once Blundy got in front, Amati charged right back past him again, taking the high road on the corners and bouncing his way through the turns.

And there was, he was running out of fuel, getting power only when it sloshed around in the turns.

The feature was marked by three yellow flags. First Blundy and Cliff Cockrum hooked together, with Blundy continuing and Cockrum spinning to a stop. Then, in two separate spins, Jim Linder and Ron Perkin performed loops to bring out the caution.