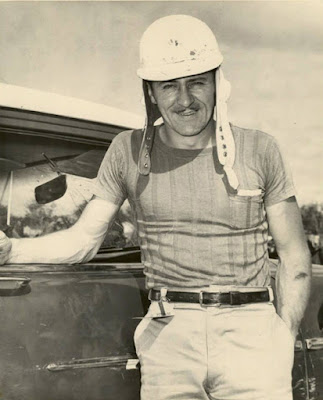 De Pere, Wis. (June 30, 1959) – Ernie Derr of Keokuk, Iowa continued to match the #1 he carries on his car when he sailed to first place in the “Badger 100” feature here Saturday night before a standing room only crowd.

The 5,000 plus fans in attendance saw Topeka’s Bill Harrison continue to have tough luck mechanically and the cagey veteran was forced to drop from the feature event after leading the pack for the first 29 laps when he threw a rod in his 1959 Pontiac.

That opened the gate for Derr and his ’57 Pontiac and the Keokuk “Komet” blazed ahead of Wayne Lee, Burlington, Iowa, making his first start behind the wheel of a new ’57 Pontiac.

Bruce Nystrom, a home-state favorite from Oshkosh, pushed his 1956 Chrysler to third place with Newt Bartholomew of Carlisle, Iowa, taking the fourth spot in a 1957 Chevrolet.