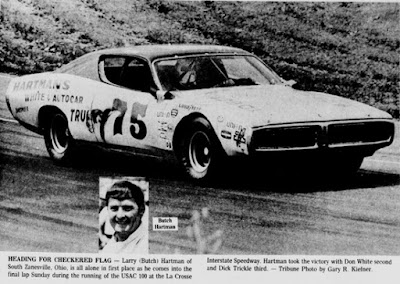 Hartman, starting from the third row in the 22-car field, passed early leader Don White of Keokuk, Iowa, on the 48th lap and easily held onto it for the rest of the way to pick up the first place prize of $1,662.

White, who finished second after starting from the inside pole position, was pressed for much of the early going by Hartman and Dick Trickle of Wisconsin Rapids who was driving a 1972 Chevelle owned by Jim McCommons of Lake Geneva.

White’s 1973 Charger was followed closely by Trickle until the 32nd lap when Hartman, in a ‘72 Charger, took second away from Trickle and began his move on White.

“My car ran perfect,” said Hartman “I was slowing down in the late laps, but I wasn’t worried about White. I knew I had almost a half a straightaway lead It was pretty hot out there and I started getting a little tired that’s something unusual for me.

This is the second consecutive USAC win for the 33-year-old Hartman who last week set the pace in the Indiana Classic 100-mile stock car dirt track event.

Ramo Stott of Keokuk, Iowa, this year's USAC point leader, placed fourth in a ‘72 Plymouth while Paul Feldner of Richfield, Wis., was fifth.

White earned the pole position with the fastest lap in the time trials, a 21.821 second circuit. Trickle was second with a 22.198 second clocking while Madison's A. J. Moldenhauer was third and Stott fourth.

Moldenhauer was running well in the picture until spinning out on the 24th lap. He finished in 11th place overall.

The yellow flag came out twice in the race’s early going. On lap five, Bob Schroyer of Toledo, Ohio, hit the wall but was unharmed. After five slow laps the green flag came out until Moldenhauer’s scrape again brought out the sweepers and the caution flag.

It was a three-car race for the entire distance and Trickle felt he was close enough to the leaders to have a shot at winning had his car not suffered a mechanical problem.

“I was running out of brakes and had to pump them all the way through the corners,” said the veteran Interstate driver. "If the brakes would have held up I would have had a chance.”

Hartman said of his failure to push harder in the latter part of the race; “I knew I had the race won. why burn the car up?”

Stott won the four-lap trophy dash in which the top four timers competed Trickle held a brief lead on the last lap but had to settle for second. White was third and Moldenhauer fourth.

Following Schroyer to the checkered flag in the 15-lap semi-feature was three state drivers; Bob Brevak of Ashland, Wis., Dan Weyker of Belgium, Wis., and Bill Gardner of Milwaukee.

Bob Whitlow of Orchard Lake, Mich., a former center for the Detroit Lions of the National Football League, was running second on the 10th lap of the semi before his engine blew and the car caught on fire briefly.

A paid crowd of 1,900 watched this, the first USAC sanctioned race ever held here. The event was originally scheduled for May 27 but was rained out.