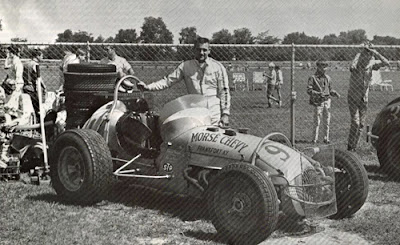 Masters jumped into the lead on the first lap after starting second. Dickson was never able to catch him although he pulled even several times. Behind Dickson were Gary Bettenhausen, Tinley Park, Ill., Chuck Allen, San Diego, Calif., and Sam Sessions, Nashville, Mich.

I was lucky to win it," said Masters, as he accepted pats on the back from well-wishers following the race.

Sessions, winner of Saturday’s Eldora Sprint at Rossburg, Ohio, picked up 25 points for his fifth-place finish Sunday. He now has 334 points to lead all USAC drivers in sprint action.

Dickson for the second day in a row finished as runner up. Dickson, currently in second place in the USAC standings, closed the gap on the leader. Sessions, by adding 35 giving him 310.

It turned out to be a perfect afternoon for racing as the fans watched the accident-free race under clear blue skies.

Several cars spun out on the track as it turned slick after an afternoon of intense racing.

Early qualifiers found the track prepared to their liking as the first six men out turned in times on the mid-23 second range.