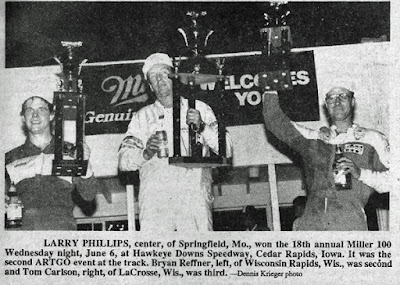 Cedar Rapids, Iowa (June 6, 1990) - If Larry Phillips is too old to run 100-lap races as he says, you’d have trouble convincing the rest of the field in the Miller 100 stock car race Wednesday night.
Phillips jumped off the first row and led every lap but had to withstand furious late-race charges by first Steve Carlson of West Salem, Wis., and then Bryan Reffner of Wisconsin Rapids.
“I was very fortunate to have a front row start,” said Phillips, a 48-year-old racer from Springfield, Mo. “Everything just worked out fine. I just got awfully tired. I’m not used to running 100-lap races. I’m too old for this.”
Old or not, Phillips was successful in holding off some younger competitors before an estimated 3,500 fans at Hawkeye Downs.
Carlson, who leads the regular weekly Late Model standings at Hawkeye Downs and won the Late Model feature Wednesday night, started in the sixth row and worked his way up to second place. After the race’s third caution flag, though, a cracked rim on his left front wheel let the air out of his tire and took the wind out of his hopes for a victory. “The car was set perfect,’ Carlson said. “I’m disappointed.”
After Carlson dropped out, Reffner made his strong bid.
“The track started to get a little bit greasy,” Reffner said. “And we seemed to work better on a slick track. We needed a couple more laps I guess.”
Phillips, the fifth different winner in five ARTGO races this season, held off Reffner, Tom Carlson of La Crosse, Wis., Kevin Cywinski of Mosinee, Wis., and Richie Bickle of Edgerton, Wis.
Steve Carlson and Steve Holzhausen tied for fast time of the night with matching 19.00 second clocking. Defending Miller 100 champion Holzhausen had a problem and crashed into the wall coming out of turn two on the 23rd lap.
Early in the main event, there was a spectacular and scary crash at the end of the front stretch.
Tim Fedewa of Lansing, Mich., blew an engine coming out of turn three and coasted to the high side of the track.
As the field drifted past and he slid to the inside of the track, Ken Reiser of Waukon slammed into the back of Fedewa's car. Moments later, Fedewa's car was engulfed in flames. Both drivers escaped serious injury.
“I looked at my mirror after the field went by, started to come down on the track and bang,” Fedewa said. “I felt heat and looked back and saw the fire. I decided it was time to get out of there.”
Phillips said the caution periods almost cost him the race. “That killed us,” he said. “It caused a problem with our chassis set-up. When it cooled off, it just wasn’t there.”