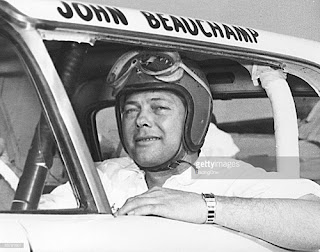 Spirited competition was evident throughout the 200-lap affair, which saw bad luck plague many drivers as wheels flew in all directions from the speeding vehicles.

Don White, driving a 1957 Ford, finished second in the event which saw the field cut down to six cars when the final lap was run. Doc Narber, who threw a wheel in the final few laps, managed to grab third position when the checkered flag dropped through the quick work of his pit crew in getting him back in action.

Ernie Derr of Keokuk, Iowa, had trouble from the word go with his 1957 Pontiac and was in and out of the race four times during the evening before finally giving it up on lap 132.

Bob Burdick of Omaha was the hard-luck king of the evening. He paced the field and did a magnificent job of driving until the 122nd lap when rear axle on his 1957 Ford broke directly in front of the grandstand. Wheel and axle rolled the length of the straightaway and Burdick was finished for the night.

Marion, Iowa's Frank Richards, driving a 1957 Chevrolet and another popular driver with the crowd, also suffered bad luck. Running in second-place until lap 106, a broken steering arm forced him from competition.

His pit crew made an effort to replace the arm but were unable to do so in time for Richards to rejoin the race.

Burdick had the top qualifying time of 31.36 seconds around the big Des Moines County Fairgrounds’ half-mile and led the pack during the time he was in the race. At the end of 50 laps, Richards was running in second position, Beauchamp in third, Derr fourth, White fifth and Narber sixth.

At the three-quarter mark, Beauchamp had taken over the lead and was out front of White, Narber and Blundy.