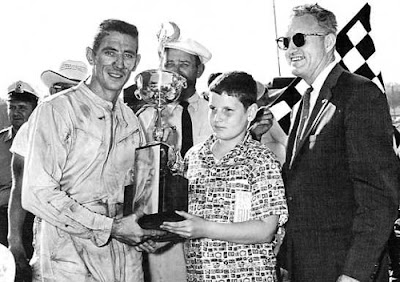 Johnny White accepts his trophy after winning the Hawkeye Futurity.


The defending International Motor Contest Association champion slid broadside on the first lap with former Futurity winner Harold Leep and Jerry Blundy following and unable to avoid him. Only White was able to return to the action for the restart.


Richert started on the pole and the Forest Lake, Minn., pilot sped away at the drop of the green and led until lap 10.


White would rebound from early misfortune and close the gap on Richert and the lead see-sawed until Richert ran out of racetrack on lap 14 and White surged permanently ahead.


White and his car owner, Sidney Weinberger of Utica, Mich., pocketed $650 for the seven-event program.


White had set fast tie during qualifying and also won the first heat. In the 8-lap event, he set a track record which had stood since 1938. White’s time of 3 minutes and 21 seconds eclipsed the old mark of 4 minutes and 34 seconds set by the great Gus Schrader of Newhall, Iowa.


Another accident sidelined former Futurity winner Pete Folse and the Bardahl Special when he and Bill Horstmeyer of Stoughton, Wis., collided during the trophy dash. Horstmeyer was able to resume and finished third in the feature.


White’s victory was his third of the season and invested more points into his IMCA lead.


A crowd of 8,200 watched the IMCA-sanctioned program.