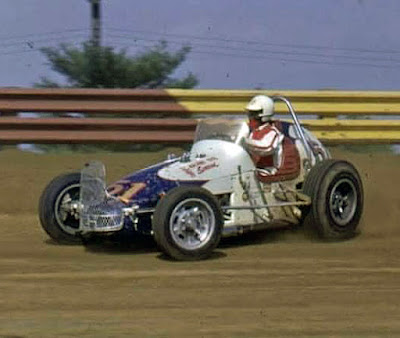 
Terre Haute, Ind. (June 19, 1966) - The gate to the winner’s circle had been closed to Roger McCluskey since September 9, 1963, but Roger found the key here yesterday afternoon and made two quick trips to the promised land.

McCluskey captured both ends of USAC’s first sprint race doubleheader before a crowd of slightly over 8,000 who paid a record purse of $11,133.
By winning both of the 30-lap races McCluskey's take was $2,788, which is the largest winners share ever paid for a sprint race In the United States.

The first of the 30-lappers was strictly no contest. McCluskey jumped into foe lead and was never headed. In fact, he said after the race, as he was getting his first rifle, “The car was handling beautifully and when I got the 'big lead' sign from my crew, just before the end, I slowed down a little."

After a 30-minute pause, while the cars and drivers were being refreshed, they were lined up in the order of finish in the first race and cranked up for another 30-lap run.

This time McCluskey wasn't able to slow down before the checkered flag fell; In fact, he was wishing for a little more oomph out of his Chevy-powered H & H Machine Special.

He was finally credited with leading 27 of the 30 laps, but during several other trips around the half-mile clay oval, the lead was changing hands more than once.
In fact, during the 16th lap McCluskey went from first to fourth and back to first again before the lap was completed and was back in the lead at the start of the 17th.

Bobby Unser, Greg Weld and rookie Dick Atkins all had a crack at the first-place spot with Unser and Atkins being able to hold the lead as they crossed the starting line, to receive credit for leading laps.

Atkins, fresh from the ranks of the California Racing Association, led from lap 22 until 25 and looked mighty impressive. He and Paul Jones, that’s right, Parnelli's brother, both made their first Midwest appearance in the sprint cars at Terre Haute.

Jones had chassis trouble and couldn’t keep his car headed in the right direction, but Atkins went like a bomb. Both of them will be heard from before this season Is over.

Atkins slipped in the second corner on the 29th lap and Bobby Unser sailed by to grab the second-place finish, but a third place your first time out in that crowd isn’t to be sneezed at.
The rest of the top 10 in the second race were: Weld, Knepper, Bob Pratt, Dickson, Allen, Gary Congdon and Williams.

It seems as though It’s getting to be a habit . . . and a bad one . . . but there was another accident yesterday. This one turned out to be one of the “not serious" kind, but it looked bad for a few minutes.

Dee Jones and Al Unser bumped wheels coming out of number four turn on the second lap of the 10-lap semi-feature and both of them smacked the outer wall, in front of the stands with a bang.

Each made the siren trip to the hospital for examination and to have cut knees stitched, but they were both back to the track - not as drivers – before the last feature race was started.

Carl Williams won the 10-lap event and along with George Snider, Chuck Taylor, Pratt and Ray Kenens earned a starting spot in the features by finishing in the top five in the semi.