1965 – Nelson by Nine Seconds in USAC Tilt at Indianola 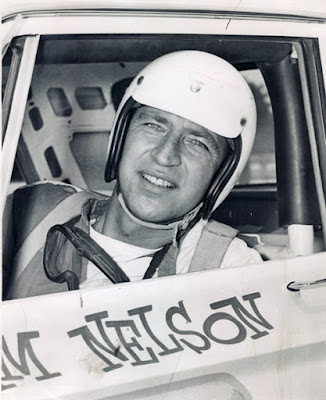 A crowd announced at 10,337 swarmed thickest around the dangerous curve sections on the 3-mile track, but the race was relatively free of accidents.


There were no serious accidents over the winding three-mile road racecourse, but Jim Hurtubise, on the comeback trail after being critically burned in a racing accident last year, spent most of the race sitting on the top of his car in a nearby lake. Hurtubise spun out of control at the end of the main straightaway at about 90 miles per hour and wound up in four feet of water.

“My oil blew out and I lost control of my car going down the grade,” smiled Hurtubise, unhurt. “The car kept right on going into that little lake or swamp. It came to a rest, I scrambled out and watched the rest of the race from the roof of the car."


Goldsmith led during much of the race but lost time in two pit stops and was not able to catch Nelson. He finished nine seconds behind the winner.


Nelson, who has been racing 25 years and is a former USAC national champion, had two pit stops. The first time he paused just long enough for his pit crew to pour 18 gallons of fuel into his 25-gallon tank. The second time he took on 20 gallons and two new tires on the left side.


Only a dozen of the original 19-car field was on hand at the finish. Besides Hurtubise, David Pearson, who qualified for the pole position in a 1965 Dodge, was among the spectators when it ended. Pearson was stalled in the pits for 20 laps due to a suspension failure after the opening lap.

In trying to get back in the race, Pearson drove like a man possessed, with radars clocking him at speeds as high as 150 miles per hour on the straightaways  Twice he averaged 85 miles per hour for one lap on the treacherous course. He finally quit for good when his water pump broke on the 41st lap.


No injuries were sustained on the rough, winding Greenwood course and only two other incidents were reported. Dick Passwater blew a tire and John Riva lost a wheel.

Both Goldsmith and the victorious Nelson had two pit stops, but Goldsmith's first stop cost him two laps on a delayed tire exchange.