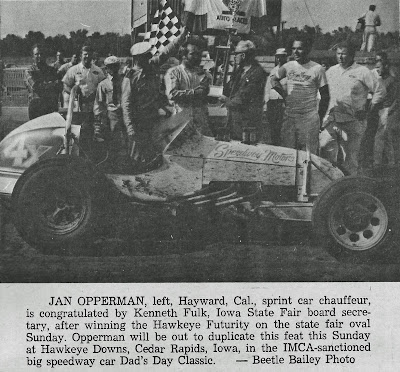 
Opperman, the rookie of the year in IMCA’s midget division last year, took the lead at the drop the green and led all 30 laps.


Driving a Chevy powered printer owned by Bill Smith of Lincoln, Neb., Opperman proved hard to beat. After early morning rains had swamped the half-mile track, the sun turned the black dirt into a boulevard; slick on the bottom and mushy on the top.


The feature race wasn’t without some spinouts. Jerry Blundy and Earl Wagner spun on lap 28 as Blundy was attempting to get around the fourth running Wagner. Kenny Gritz of Lincoln, Neb., looped his machine while running third a few laps earlier.


Al Futrell of St. Louis, Mo., was treated for water burns after his car lost a water hose in the last laps of the feature. He was not seriously injured and later released from a local hospital.


A crowd of 4,500 watched the Futurity under ideal conditions, but the early morning storms put a damper on the attendance.


Dick Sutcliffe of Greenwood, Mo., the day’s fastest qualifier with a 24.90 second clocking, finished second to Opperman in the race.