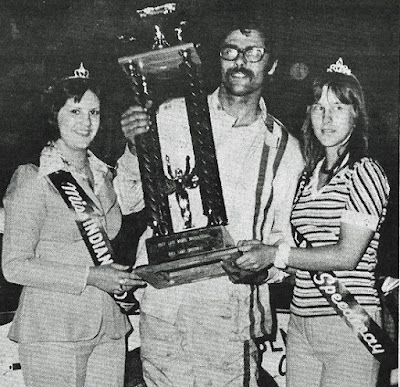 
Rice Lake, Wis. (June 16, 1977) – Dan Nesteby was on his way back from Canada to his home in Waterloo, Iowa, when he decided to stop at Rice Lake Speedway on Thursday night. He was glad he did…


In his first appearance at the track, Nesteby scored a six car-length victory over Punky Manor of Altoona, Wis., in the 30-lap late model invitational feature. Both drover Camaros built by Ed Sanger of Waterloo, Iowa.


A massive power outage occurred in North Central Wisconsin plunging the track into darkness for about an hour, just before the third heat. Dave Morgan and Red Steffen didn’t complain, however, as that had damaged their cars in the second heat, giving them ample time to make repairs.


When the feature finally started, Morgan took the early lead, followed closely by Leon Plank and Tom Steuding. Plank’s differential seized and he spun sideways, taking Steuding with him. Plank was towed to the pits and Stueding was forced to restart from the rear of the field.


Nesteby, in second, chased Morgan, the fast qualifier, but repeated attempts to get by him were futile. With smoke coming from Morgan’s engine, Nesteby was finally able to get by him, as did Manor and Steffen. Neither one could catch Nesteby, however.


Morgan’s troublesome engine finally gave up and he coasted to a stop just short of the finish line and officially was placed at 11th.