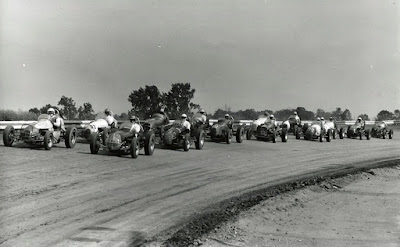 New Bremen, Ohio (June 28, 1959) - Don Branson, of Champaign, Ill., kept on his winning ways at the New Bremen Speedway Sunday with a remarkable win in the 30-lap feature and a second in the first 8-lap heat race.

Branson, who leads in point standings in the United States Auto Club with three victories, set a track record of 10 minutes and 42 seconds for 30-laps.

Branson repeated his victory of a year ago at the speedway, by gunning his way from number two spot and leading all the way. By the middle of the feature, he had lapped the entire field with the exception of six cars.

With 15 cars in the feature, and a heavy wind throughout the entire race he drove a skillful race and was never in trouble.

With a purse of $5,000, the top drivers of the USAC organization flocked to the speedway for a cut of the winnings.

McWithey topped all the drivers in the qualification runs with a speedy time of 19:91 seconds for the fast half-mile track. McWithey had the same car that Sachs drove to the 1958 championship and also set the track record of 19:483.

The race was accident free, with the exception of Jud Larson, of Tampa, Fla., who grazed the wall in the second heat race and smashed the tail of his car.

Last year Jimmie Davis was killed at the track when Ed Elisian accidentally hit his car.