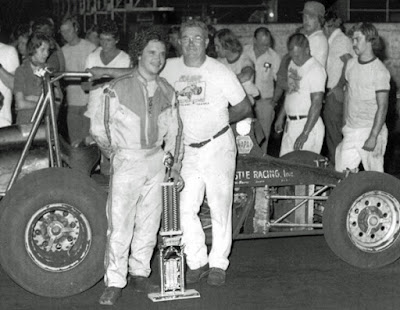 It was a blanket finish, however. The 25-lap feature event found the pair hooked up in a two-car race duel well ahead of third-place finish Doug Wolfgang of Lincoln, Neb., and Ralph Blackett of Des Moines.

The event, which had originally bet set for the day before, but was washed out, was held on a heavy track after rains made a quagmire of the oval.

But, National Speedways officials and track personnel did an admirable job preparing the half-mile track. The only drawback to what would have been an ideal night was the narrow chutes created by the heavy rains and high humidity.

For Carson, it was a double payoff. He not only pocketed the $1,000 for winning the 25-lap main event, but took over sole position of first place in the National Speedways Contest Association point standings. He was a mere 10 points behind Doug Wolfgang going into the Futurity.

Carson also won the second heat race when he bested Ralph Blackett and Wolfgang in that order.

One mishap occurred on lap 15 of the feature when Jimmy Sills of Sacramento, Calif., Mike Brooks of Knoxville, Iowa, and Con Edwards of Ankeny, Iowa, tangled coming off of turn two. No one was injured, but at the same moment, Jimmy Riggins of Lincoln, Neb. abruptly pulled off the track in turn four after sustaining burns to the back of his legs.