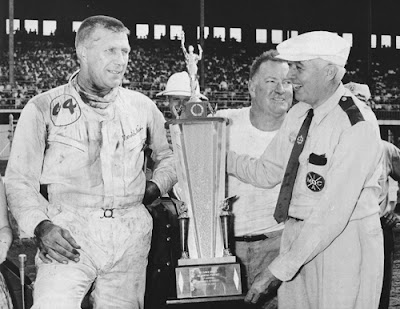 Des Moines, Iowa (June 17, 1964) – Harold Leep, who use to make life miserable for Offenhauser drivers, climbed into one on Sunday afternoon and took home the Gaylord White Memorial Trophy in the Hawkeye Futurity 30-lap feature before 8,000 race fans at the Iowa State Fairgrounds.

The Offy he drove was the same one Buzz Barton piloted to victory in the Futurity a year ago – a sleek red and black outfit owned by Irene Lempelius, a dress designer from St. Paul, Minn.

Bill Horstmeyer of Stoughton, Wis., also driving a Offy, finished second in the 25-lap, 50-mile grind worth $600 to the winner, who was third here a year ago.

He drew that number twice for starting positions in the time trials and that’s where he finished in the main event. He did manage a third place in the Australian Pursuit and had the third fastest car in time trials.

Leep, a 29-year-old native of Wichita, Kan., started sixth and didn’t get the lead until he overhauled Horstmeyer on the sixth lap, when his rival grazed the west wall.

Horstmeyer, who had earlier taken the top spot from polesitter Johnny Rutherford of Fort Worth, Tex., regained the lead on lap 11 but stayed in front for only a lap before fading back to third in a duel with Johnny White of Warren, Mich.

White would later spin into the fence in turn four on lap 32 giving Horstmeyer back second place. By that time, however, Leep had put enough distance between himself and the rest of the field to erase any challenges.