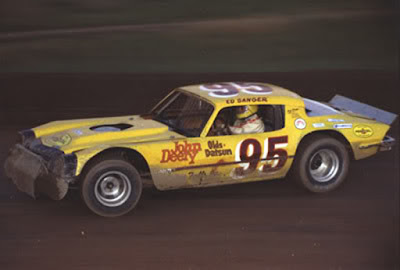 
Independence, Iowa (June 3, 1978) – Red Dralle of Evansdale lost the front end of his car Saturday night and Duane Bentley of Fairbank lost his beard, but veteran Ed Sanger of Waterloo was a winner, as usual, during a wild night of stock car racing at the Buchanan County Fairgrounds.


The late model feature saw five different leaders before Sanger took the checkered flag with Joe Schaefer of Waterloo close on his heels.


John Weers of Readlyn led in the early going but an accident near the end of the second lap eliminated Weers, Dralle and hometown driver Gary Crawford. In addition to losing the front end of his car, Dralle suffered facial cuts in the accident but was released from the hospital later.


Bob Kinsella and Roger Bruggeman, both of Dubuque, took turns leading after the restart before Schaefer grabbed the top spot on lap 12, only to see Sanger take the lead seven laps later and claim his third feature win of the young season.


Bentley had promised his father, Gordon, he would get a haircut and shave when he won his first feature race, and perhaps to his regret, was forced to make good on his vow after edging Dick Chapman II of Dubuque in the sportsman main event.