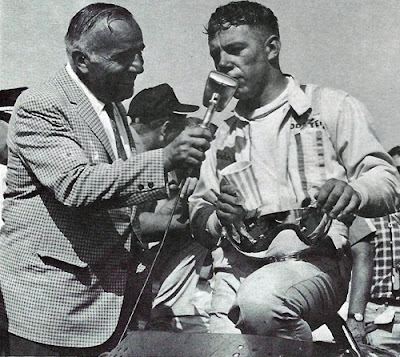 Gordon Johncock is interviewed in victory lane after winning the 150-miler at Langhorne.

He also took home a whale of a sore neck.

“This has to be the toughest track on the circuit – my neck hurts from all of those sharp turns,” said Johncock of Hastings, Mich., after outdueling Bobby Unser in sweltering heat Sunday.

Johncock and Unser, the winner of this year’s Indianapolis 500, were the only leaders during the grueling test. The winner said his neck was sore, he had to drive the last 50 miles with one hand on the steering wheel and the other supporting his chin.

“It’s physically easier to drive in the Indianapolis 500 than this track,” Johncock added. He explained that the longer straightaways made Indy look like a superhighway.

Johncock, driving a rear-engine turbo Offenhauser, hooked up in a down-to-the-wire finish with Unser, of Albuquerque, N.M., before taking the race by 12 seconds.

The 85 degree heat didn’t bother him. “It was cooler in my car, than outside,” he remarked.

Johncock led from the start to the 41st lap and the lead changed hands several times before he robbed it from Unser on the 102nd turn.