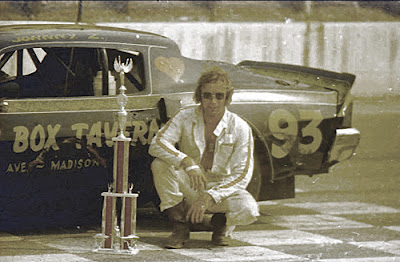 
Kaukauna, Wis. (June 22, 1975) — John Ziegler of Madison, Wis., wheeled his 1974 Camaro to victory in the first race of the "Red, White and Blue" state championship series at the Wisconsin International Raceway with four car lengths to spare over Tom Reffner of Rudolph, Sunday afternoon.

Slinger's Tony Strupp paced the 24-car starting field for the first three laps before Doug Strasburg of Johnson Creek slipped into the top spot. Strasburg set the pace until the 28th lap when Ziegler and Reffner bolted past on the outside.

Reffner quickly maneuvered past Ziegler and took the lead on the 30th lap with his 1974 AMC Javelin. However, Reffner was unable to pull away from Ziegler and on the 44th lap Ziegler regained the lead when Reffner began experiencing minor handling problems with his car.

Following Ziegler and Reffner across the finish line were Rich Somers of Stevens Point, the defending state champion, with his 1973 Mustang; Strasburg in his 1973 Camaro; John Reimer, Caledonia, 1973 Camaro; and Larry Schuler, Lockport, Ill., '73 Camaro.

Ziegler, who has been driving the winning car only three weeks after demolishing another racer at Kaukauna this Spring, said, "Every week it keeps going a little faster. I've raced here six times and every time I either cracked up or blew an engine."

Dousman's Steve Lurvey won the 20-lap semi-feature with his smooth running 1973 Nova over Del Keup of Green Bay in a 1973 Camaro and Darrell Swartout of Janesville in a 1973 Mustang.

The race was halted on the 15th lap in one of the worst crashes ever at the track. The crash occurred when Pat Griffin of Galesville spun in the first turn. Junior Dunn of Roscoe, Ill., approached the scene at full speed, spun to avoid hitting Griffin's stalled racer, flipped over and in the process hit the first turn wall. The car flew high into the air and was caught in the outer wall wire mesh.

Dunn crawled out of the wreck and was rushed to the Kaukauna Community Hospital where he was treated for a sprained ankle and other bruises. Mike Mattson of Marquette, Mich., made his long trip to the track worthwhile as he won the 10-Iap first heat and the 15-lap consolation. The consolation was tightly contested by Butch Mierendorf of South Milwaukee second and Ray Kreyer of Rio third.


Wayne Erickson won the second heat, race while Ziegler emerged the winner in the third heat race. Larry Schuler brought the crowd of 6,174 to its feet when he outraced Dick Trickle of Wisconsin Rapids to the finish line in the event. Schuler, a 22-year-old driver from Lockport, III., was a popular winner as he downed the national stock car feature win record holder.

Reffner topped the 56 late model stock car field with a 21.33 lap around the half-mile paved oval.