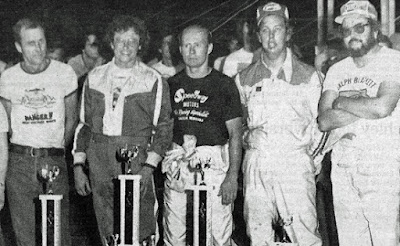 Des Moines, Iowa (July 25, 1979) – Tim Green perhaps said it better than anyone else on Wednesday night.

“Wolfgang is tough,” was the way he said it, and that pretty much summed things up after Doug Wolfgang of Lincoln, Neb., took the lead on lap 31 and went on to win the 40-lap NAPA Futurity for sprint cars at the Iowa State Fairgrounds Speedway. Wolfgang earned $1,500 for the victory.

Green, who left his home in Sacramento, Calif., and moved to Iowa to learn how to drive sprint cars this year, was pretty tough himself. Although he’s driven only 30 races, Green took the lead on the first lap from his outside front row starting position and held it until Wolfgang slipped by 30 laps later.

Wolfgang started outside in the third row after posting fast time for the night at 21.85 seconds. While he worked his way into contention, Green held off National Speedways Contest Association point leader Shane Carson of Oklahoma City, Okla., for two laps before Carson began to fade.

Then, John Stevenson of St. Paul, Minn., moved into a challenging position. A few laps later, it was a three-car fray with Green leading Stevenson and Wolfgang.

Wolfgang worked around Stevenson and soon was challenging Green. Green kept to the low-side with Wolfgang repeatedly trying to get around him on the high-side. Lap after lap they continued until Wolfgang got past him on the 31st circuit.

“I knew someone was challenging me, but I didn’t know who,” Green said. “I figured it was probably Wolfgang and then I caught a glimpse of that purple 4X and I knew I was in trouble.”

Following Wolfgang, Green and Stevenson across the finish line were Bill Robison of Topeka, Kan., and Jimmy Sills of Sacramento, Calif.

If there were an award for dexterity, it would have gone to Mike Thomas of Des Moines, who completed each lap of each race. He finished fourth in the C-main, second in the B-main and eleventh in the A-main – a total of 80 laps.