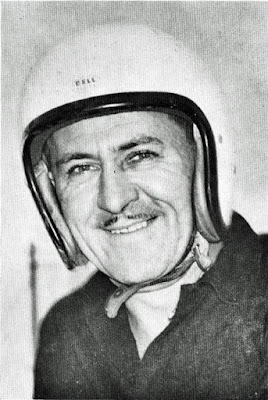 With Gene Van Winkle and Woody Brinkman handling the officiating for National Speedways, Inc., Ernie Derr of Keokuk, Iowa flawlessly powered his 1961 Pontiac to the checkered flag in the 50-lap main event in 22 minutes and 21 seconds.

Ramo Stott, also of Keokuk, Iowa, found the going excellent as well, as he edged Derr in the 10-lap trophy dash to set a new IMCA standard of 4 minutes and 28 seconds. Stott, racing a 1961 Ford, eclipsed the old record of 4 minutes and 31 seconds set by Derr in 1959.

Stott trailed Derr across the finish line in the main event with Chub Liebe of Oelwein, Iowa coming in third and Lenny Funk of Otis, Kan., fourth. Liebe and Funk race 1961 Fords.

Derr, who also won the first heat, nudged ahead of Stott on the first lap of the feature and was able to stave off numerous challenges by his fellow townsman as he sped to the new world mark.