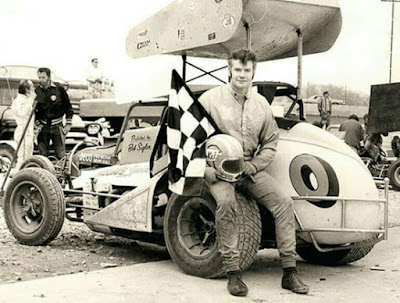 Sedalia, Mo. (July 12, 1976) - Ohio sprint car driver Rick Ferkel lived up to his reputation of being the hot test item on the circuit Saturday, blowing off the competition for a win in the 35-lap Missouri Sprint National finals.

The Tiffin, Ohio, racer picked up a check for $2,000 after running away with the second annual sprint car classic before 4,000 fans at the Missouri State Fairgrounds in Sedalia.

Racing on the half-mile dirt oval opened Thursday on a sad note with the announcement that Larry Kirkpatrick, Wood River, Ill., died earlier in the day of injuries he suffered July 5 in a sprint car race at West Memphis, Ark.

Kirkpatrick, a competitor at the Sprint Nationals last year, had made the jump this season to the United States Auto Club circuit. Saturday night drivers passing through the crowd collected $1,602 from the fans for Kirkpatrick’s widow and three children.

Second-year driver Dick Morris, Sioux City, Iowa, made the railbirds set up and take notice as he toured the track in 22.06 seconds, the fastest a sprint car has ever been timed around the oval. He erased the 1971 qualifying run of 22.45 seconds which had been the standard. It was set by Steve Schultz of Indianapolis, Ind.

Three of the four quick times Thursday came from the first five qualifiers on the track. Columbia's David Dwyer was the third driver out and was clocked in 22.32, good for second place. Eddie Leavitt, the 1975 National Super-Modified Champion at Knoxville, was the first car out Thursday and his 22.71 time was good enough for third spot. Chuck Amati, from Freeman Spur, Ill., was the third fastest with a 22.66 time, he was the 26th driver on the track. Morris came out in the fifth position.

The format called for four 12-lap heat races with the top three in each heat moving on to the A-Feature on Saturday night. Morris, Dwyer, Amati and Leavitt all captured first place in the heat races, Morris came back to edge Dwyer in the cash dash.

The night wound up with a 15-lap consolation feature for all the non-qualifiers. Johnny Suggs, Mesquite, Tex., edged Jerry Johnson, Kirksville, Mo., for first place in that event, with Don Bradberry, Sweet Springs, Mo., fourth.

Dean Elliot, California, Mo., grabbed third place in the fourth heat to earn a spot in the A-Feature. Elliott drove Bill Campbell’s car in the Friday event. Campbell, of Russellville, had qualified for the C-Feature on Thursday night then elected to give up that spot and let Elliott have a shot at the A-Feature. Elliott made his first driving appearance since flipping down the backstretch in last year’s sprint car show at the Missouri State Fair.

While Ferkel, Utz and Parkinson Jr., took the big cash Saturday, it was Jim Jenkins, Slater, Mo., that did most of the work and passed the most cars.

The veteran racer was qualified for the B-Feature but was called upon to start in the C to make a full field of cars for the 20-lap race. Coming from the 17th spot, he took first place in that race, nipping Johnny Suggs in the final three laps.

He came back to finish second to Ralph Parkinson Sr., in the 25-lap B-Feature after only a 20-minute intermission. But in doing so he lost the brakes on the right rear of his car and was forced to change the system during the B and A main events.

In the A, Jenkins started from the 25th spot and was flagged in the ninth position when the race ended, running 80 laps of green flag competition Saturday. Gennetten, winner of the Memorial Day sprint and midget main events on the track, was unable to start the feature as he encountered car problems prior to the show Saturday night.

Morris and Dwyer made up the front row with Amati and Leavitt in the second row and Utz and Ferkel in row three.