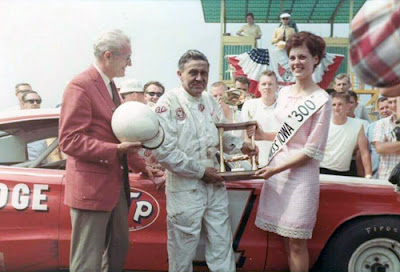 Des Moines, Iowa (July 9, 1967) - Ernie Derr of Keokuk, Iowa, took the lead on the first lap, relinquished it only briefly during three pit stops and cruised to his second straight Iowa 300 late-model stock car race Sunday at the Iowa State Fairgrounds before a crowd of 20,351.

Dick Hutcherson, the former International Motor Contest Association champion who is now a NASCAR star, provided the strongest challenge for 295 laps. That's when the engine of his 1967 Fairlane Ford blew up and he dropped from second to third place.

Keokuk's Ramo Stott, three-time Iowa 300 winner, took over second place after Hutcherson's misfortune. Derr had his 1967 Charger purring over the 150-mile grind on a track which he said was in its best condition ever.

Hutcherson, formerly of Keokuk, started on the pole after setting a one-lap record on the half-mile dirt track of 25.83 seconds. That broke Stott's mark of 26 seconds set July 10, 1966. Derr also was under Stott's time at 25.88 seconds to gain a front row starting position.

Hutcherson stayed close to Derr and attempted to pass on lap 35 but Derr's Dodge Charger was able to stay ahead.

Derr pulled into the pits for his 30-second mandatory pit stop in the first 100 laps on lap 91 and Hutcherson would take the lead.

Hutch then took his required recess on lap 93 and Stott went into a one-lap lead. Der would zip back in front when Stott pitted on lap 94.


Derr would return for gas on lap 107 and again, Hutcherson would take over the top spot. But Derr would regain the lead 12 laps later and begin to pull away from Hutcherson and the rest of the field.

The seven-time IMCA national champion would lap Hutcherson on lap 171. Both would stop for gas on lap 206 with Hutcherson back on out first but his gain would be insignificant.

By lap 150, Derr had an 18-second lead and 20 circuits later, as Hutcherson began to slow with engine troubles, Derr had increased his margin to over 20 seconds.

Despite an ailing motor, Hutcherson appeared to have second-place cinched but his car began smoking badly with only 8 laps left. It finally gave out on lap 296.