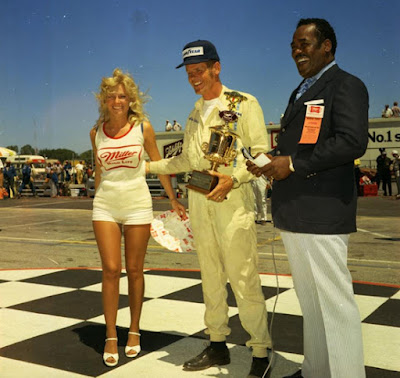 Bobby Unser accepts his accolades after winning the Miller 200 at Milwaukee.

Unser took the lead only six miles from the finish when Jack Bowsher’s 1969 Ford Torino coasted into the pits out of fuel while a caution flag was out.

The flag was out after Paul Bauer’s 1968 Chevrolet cut off Don White, nicked the Keokuk, Iowa driver’s fender, and smashed head on into the grandstand wall on lap 192.

Two laps later, Bowsher pitted and Unser took the lead. The safety trucks kept the cars in line until the 198th lap, much to the dismay of the 31,774 race fans in attendance. When the green flag was finally reinstated, the Unser’s lead was too big for White to surmount in the final two circuits.

White’s 1969 Dodge Charger finished second, Bowsher was third, and Norm Nelson - Saturday’s fast qualifier at 103.122 miles per hour – was fourth in his 1969 Roadrunner.

Yellow flags were the story of the day and kept the winning speed down to 94.27 miles per hour as four of the race leaders were forced out.

A.J Foyt grabbed a huge early lead and held it through three yellow lights during the first 80 miles.

Ray Dropp of Palatine, Ill., spun out on lap 17 for a brief caution; then Al Unser blew his engine on the 53rd lap. Roger McCluskey skidded in the oil left from Unser’s engine and slammed backwards into the wall. McCluskey’s rear end was so wrinkled, his crew had to batter away just to remove the gas cap.

USAC rookie Dick Trickle of Wisconsin Rapids, Wis., took over the lead when Foyt pitted after another spinout on lap 80. Trickle’s lead was fleeting, and he too was forced out when the engine on his 1969 Torino let go on lap 120.

Don White was the next leader and his reign lasted from lap 90 to 135 when he went to the pits for fresh tires. During that time, Foyt and Butch Hartman staged a brilliant duel for a distant second which didn’t end until Foyt slammed into Ron Keselowski on lap 107. Keselowski spun out on the north end and there simply wasn’t any place for Foyt to go.

Butch Hartman steered his 1969 Charger into the lead when White stopped for tires and led until his engine let go on lap 168. Bowsher took over from there until he ran out of fuel.

Bobby Unser praised his car and crew. “The car ran very well,” he said. “It never missed all day. I wouldn’t have had anything to complain about if I hadn’t won. All it needed was a little chassis adjustment on the first pit stop.”

Unser, gulping aspirin, said all the blown engines and pit stop made things “a little confusing”.

“I don’t usually take aspirin after a race but the stock cars are sort of hollow and the sound reverberates in the there.”