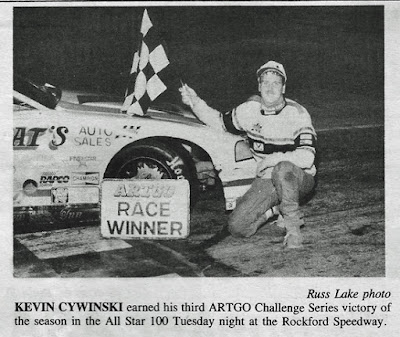 Loves Park, Ill. (July 23, 1991) – Kevin Cywinski collected his third ARTGO Challenge Series victory of the summer and his second at Rockford Speedway as he claimed the annual All Star 100 Tuesday night.

Cywinski jumped into the lead from his pole position and was rarely challenged over the first 58 circuits despite several cautions that helped keep the talented field bunched.

Joe Shear, who started the event seventh, was a solid fourth by the 50-lap mark and quickly moved up to second over the next 20 laps as he passed both Larry Schuler and ARTGO point leader Steve Carlson.

Shear began applying heavy pressure to Cywinski on lap 78 closing in on the leader in the corners only to let Cywinski slam the door shut on the straightaways.

On lap 93 Shear tried to get by Cywinski in turns three and four only to take a slide out of the fourth turn. Shear was able to regain control of his car but Cywinski was able to pull away in a comfortable fashion.