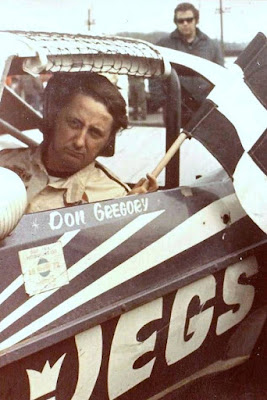 Gregory was definitely the class of the field on this particular evening and was hard pressed by only one driver until the rain stopped the proceedings after 160 laps.

Buck Simmons of Woodstock, Ga., had stalked Gregory from the very first lap of the race until he was taken out by an accident on lap 127. Dan Conner of Shawnee Mission, Kan., spun coming out of turn four, collecting Simmons and several other drivers.

Second place went to Terry Bivins of Shawnee, Kan., who was two laps down in his 1973 Nova, but had worked his way up from his 19th starting position. For the last 50 laps, Bivins stayed right on Gregory’s bumper not wanting the Ohio speedster to widen the margin between them.

Third place went to Bob Senneker of Door, Mich., who was also two laps down in his 1971 Chevelle. The next two finishers also stayed within two laps of the leader, Terry Brumley of Springfield, Mo., and Tom Maier of Midland, Mich.

After collecting $5,460 for the night, Gregory explained, “It was the tires – we just picked the right set of tires. We didn’t change gears or anything after Saturday.”

Maier guided his 1973 Camaro around the half-mile oval in 18.18 seconds, destroying the former mark of 18.55 seconds set by Dick Trickle of Wisconsin Rapids, Wis. Maier also won the 25-lap qualifying feature on Saturday and started the scheduled 300-lapper on the pole position.

Unfortunately for Tom, he picked the wrong tires and developed a blistered tread, and finally pitted for rubber.

Maier illustrated his dilemma, saying, “When I was running with blistered tires, my crew was clocking me at 19.70 seconds. When I got the new tires, they had me going in the 18.30’s.

Dick Trickle, who had won the last two National Championship races at I-70, was never a factor in this one as his 1970 Mustang retired to the pit area after 42 laps with a sick engine. He was running fifth at that point.