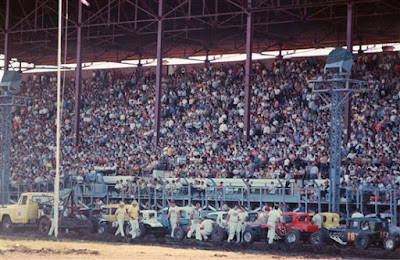 Esther Merrick, handling entries for her husband, promoter Jack Merrick, reported Friday afternoon she had 84 official entry blanks on hand. In addition, more than a half dozen drivers had phoned reporting intentions to be here. Still others had phoned that they would bring entry blanks with them and a few others had signified intentions of running, but so far had neglected to file entry sheets.

Five Hutchinson drivers have officially entered and one or two other Hutchinson entries are expected.

Heading the “home team” is Henry Ellington, the 1966 National champ, and only non-Wichitan ever to win the National. Ellington will drive the Chevy speedster owned by Kenneth McCoy.

Another Hutchinson car will be in the field but with a Wichita driver, Jerry Everhart. Willis Curless, who helped engineer several outstanding race cars while he lived in Arkansas City, recently moved to Hutchinson. He brought one of his better cars, No. 62, to Hutchinson and Friday got confirmation that Everhart would be his driver.

Among other new entries is Gary Harrison of Topeka, who will be at the wheel of a Chevy, No. 87. Harrison is the son of Bill Harrison, who achieved considerable fame as a driver of IMCA late model stock cars,

Gordon Lucas, Wichita, “checked in” by phone Friday. He’ll be driving No. 94, as did Bill Robinson, Topeka, owner and driver of No. 47, and Tom Carlisle, Wichita, who’ll pilot No. 45.

Time trials will start at noon Saturday, following inspection, and warm-ups which will give drivers a chance to make last minute adjustments in tires or other equipment for maximum performance on the Hutchinson track. The trials will continue virtually all afternoon.

Dorothy Woods will introduce Miss National Modified queen contestants to the press and contest judges at a luncheon at 1 p.m. Saturday at the Hilton Hotel.

Special entertainment, including introduction of pageant contestants will get underway at the track at 1 p.m. Sunday. The first of four heat races will be run at 2 p.m., followed by a trophy dash featuring heat winners, the 30-lap semi-National and the 50-lap National Championship.