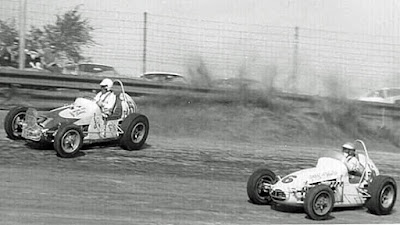 Don Branson (6) and Roger McCluskey (51) battle for the top spot at Eldora.

Branson, of Champaign, Ill., took over the lead on the 22nd lap and maintained it the rest of the way as he captured the 30-lap USAC sprint car feature.

Branson passed pole-sitter Roger McCluskey and led for the last nine laps of the race. McCluskey was the pace-setter for the first 21 circuits, however, after losing his battle with Branson he faded and settled for sixth position.

By winning the 15-mile race on Eldora’s half-mile track, Branson collected $860. His time for the feature was 10 minutes and 14 seconds.

McCluskey had the day’s fastest heat race time by taking one of the 8-lap prelims in 2 minutes and 45 seconds. His one-lap qualification time of 19.10 seconds was the quickest of the day.

A roll bar saved the day for Sam Sessions. Sessions, trying to qualify, hit the outer-guard rail when his throttle stuck going into the first turn. His car flipped high into the air, but Sessions was saved from serious injuries by the roll bar on his car. He was checked by physicians and suffered no injuries whatsoever.